Since most mushrooms are inedible and some of the most common ones are poisonous, is it important to take care when identifying species, especially if you intend to eat them. Comparing the mushroom’s likeness to a photograph is not sufficient as an identification method by itself; many other characteristics of the mushroom must also be checked. A mushroom can look very different at different ages and stages of its growth.

If you collect any mushrooms to eat make sure that your identification checks out in every detail. Never eat any wild mushroom until an expert mycologist has checked your identification. Even when you know a mushroom well, weather conditions or animal damage can cause differences in appearance that could lead to misidentification. 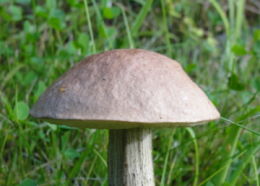 The size and shape of the cap varies between different species, but differs also across fungi of the same species at different ages. The colour also changes according to both the age of the fungus and the weather. The colours of the mushrooms in the Russula genus fade, for example, in rain. The hat skin also holds a lot of information: it can be slimy, sticky or dry, smooth, grainy, scaly, or speckled with fallen scales. Each property is useful in the identification process. 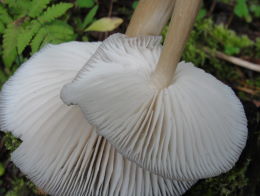 The gills and tubes vary depending on the species. Important characteristics are the width, thickness, and density of the discs, any branches present, and the way in which they are attached to the stem. The colour of the gills and tubes is also an important feature.

The way a mushroom's gills are attached to the stem is a very important feature to look at when identifying mushrooms. The following is a list of the standard types of gill attachments.

The colour of the spore powder is a fairly constant characteristic and therefore helps to distinguish between fungi. The colour can be identified by taking a trace sample: a healthy cap is placed, with the discs facing down, on a single-coloured sheet of paper for a few hours, then the streaks of trace powder that appear on the paper are examined. The spore powder can be white, light pink, brown, black or yellow. 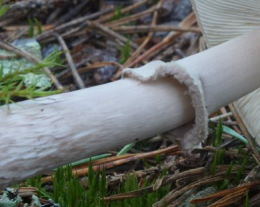 The foot is usually attached in the middle of the hat, but it can also be off-centre, or even lie at the edge of the hat. The foot can be smooth or textured on the surface: it can have streaks, dots, tassels, scales, or mesh patterns.

Some fungi have an outer peel in their development stage. As the fungus grows, the peel cracks open, and peel remains can be found on the surface of the hat or on the base of the foot. This can take the form of a sock or peel plates, for example. 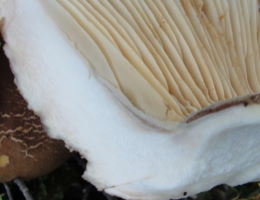 Mushroom flesh consists of threads and is often fibrous. In mushrooms in the genuses Russula and Lactarius, the meat is brittle and breaks easily in all directions. An important characteristic to note when identifying is the colour of the mushroom flesh, and whether the colour changes as the surface is cut. Milky liquid that drips from mushrooms is, for example, an good indicator of a mushroom of the Lactarius genus.

Some species have a typical scent, so it is important to become familiar with smelling the mushrooms. Elements of their surroundings, for instance moisture or cold, can certainly weaken the aroma of the fungus. When describing the scent, it is common to resort to well-known aromas as points of comparison: common scents include licorice, onion, herring, flour, anise, or pencil. The scent of the Lepista nuda (Wood Blewit), for example, is often described as burnt rubber.

The taste is also a typical chemical characteristic of the fungus. The key flavours are mild, sharp and bitter. Arbitrarily tasting mushrooms is of no use, and can in fact be dangerous. Some of the most poisonous mushrooms can be mild in taste, while several popular mushrooms in the Lactarisus genus have a burning sharp taste when fresh. Never taste a mushroom if you are not 100% sure it is not one of the poisonous ones and never swallow. It is important not to taste mushrooms around small children, as they are prone to imitating habits.

When identifying fungi, it is also possible to acquire information from the tree species present at the plant site. Birch, aspen, pine, oak, and spruce, for example, each have their own kind of species in the Leccinum genus.

Last but not least

We use cookies to improve your experience on our site and to show you relevant advertising, as well as to analyze traffic.

If you plan to collect fungi to be eaten, misidentified mushrooms can make you sick or kill you. Never eat a mushroom that you are not 100% sure is edible. Use many resources, and be skeptical of your own conclusions. Please consider that many mushrooms take years of experience to identify reliably.

The site takes no responsibility for damage caused by ingesting poisonous mushrooms. If you continue, you agree to view this website under these terms.